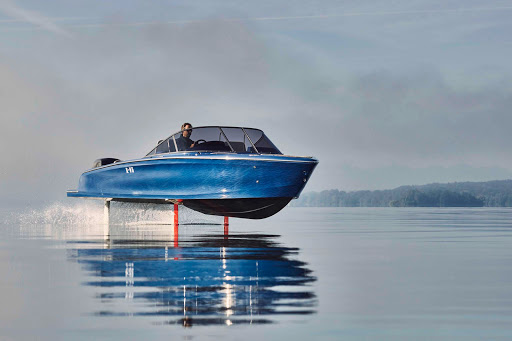 The best-selling Candela Seven electric boat flies above the waves at high speeds, without wake, noise or emissions. Its long range and performance stems from hydrofoils – underwater wings – that were invented 100 years ago by the Italian engineer Enrico Forlanini. Next week, Candela Seven makes its debut on Lago Maggiore, where Forlanini tried out his invention 100 years ago.

In the beginning of the 20th century, Italian engineer Enrico Forlanini skimmed across Lago Maggiore in an entirely new type of craft, never seen before. His innovative “hydrofoil boat” had wings beneath the hull, which enabled it to soar above the water at record shattering speeds. Despite using a small and heavy steam engine, his odd-looking wooden boat reached 30 knots without much effort – considerably faster than fastest steamships of the era.

The hydrofoil – the underwater wing – that Forlanini had invented, eventually led to the foiling passenger ships that now haul travellers between stops in Lake Maggiore, Lake Como and Lake Garda, but the idea never caught on for leisure boats like Forlanini’s own craft.

That is, until now.

Next week, April 13-16, the flying boats return to Lago Maggiore. And this time, they’re electric. The Swedish-made Candela Seven is the first electric boat equipped with modern, submerged hydrofoils. Since its debut in 2018, the Seven has outsold all other electric premium boats in Europe, thanks to the remarkable performance it achieves by using a modern version of Forlanini’s invention. Lifted up on computer-stabilized hydrofoils, the Candela Seven uses 80 % less power than conventional boats and can cruise for 2,5 hours at a speed of 20 knots. This remarkable performance makes it the first electric boat with enough range and the necessary speed to compete with fossil fuel powerboats.

Instead of the wood planks and strings that Forlanini’s boat was consisted of, the Candela Seven is entirely built from carbon fiber. And its foils are hyper efficient and controlled by software and sensors, which adjust the wing’s attack angle 100 times per second provide superior stability and minimize wake. And while Forlanini’s wood-burning steam engine was silent, Candela’s efficient electric drive train makes the Swedish craft almost inaudible.

- Flying above the water without any noise is truly a magical feeling. It’s really how boating should be. And since it doesn’t create wake or emissions, you can enjoy the thrill of waterskiing or wakeboarding without destroying our pristine lakes, says Umberto Amos, the head of ABC boats, the Candela reseller in Lago Maggiore.

The Swedish boat builder started off in 2018, and has since captured a large share of the budding market for electric boats. Umberto Amos is confident that the Seven will be a hit on Lago Maggiore, too.

- With a range of 50 nautical miles, you can go anywhere on the lake at high speeds. I think this is how boats will look like in the future. When you drive it, you instantly realize it’s a shame that no one put Forlanini’s invention to use before, says Umberto Amos.

Candela Seven is the world's only electric boat with speed and range on par with fossil fuel powered boat. And a behavior in rough sea second to none. Simply the future of boating.

Posted by The World Marine Power Directory at 16:02 No comments:

With in-person events expected to go ahead later this year, the global leisure marine sector is anticipating the return of METSTRADE 2021 from 16 to 18 November in Amsterdam. RAI Amsterdam has announced the parameters for this preeminent event which promises to be well-attended by both exhibitors and visitors.

The main goal of RAI Amsterdam and its partner ICOMIA will be to host a safe and successful in-person event in Hall 1-7 and the Elicium building of the RAI Convention Centre. With over 1,100 exhibitors already signed-up, preparations are well underway for METSTRADE 2021. RAI Amsterdam is carefully planning for different scenarios and will be deploying its robust and comprehensive protocol to enable a safe and comfortable return to in-person meetings. The Early Bird deadline for exhibitor registration will end on May 1 and the aim is to complete the allocation of show floor spaces in July.

Posted by The World Marine Power Directory at 15:13 No comments:

IWATA, March 22, 2021 - Yamaha Motor Co., Ltd. announced today that it made an investment to Siren Marine, Inc. (Siren Marine), a company that has smart boat technology in the United States and provides innovative connected boat solutions to the marine industry.

Siren Marine is a company using smart boat technology in order to provide a greater "peace of mind" to customers who enjoy boating. The company provides devices that can manage and monitor critical systems such as batteries, bilge levels, shore power, and services to track boat location, and secure customers boats from unauthorized entry and theft.

This investment in Siren Marine has been realized from the activities of Yamaha Motor Ventures & Laboratory Silicon Valley (YMVSV), a group company engaged in CVC* activities, and is compatible with IoT, which is drawing attention in the marine industry. It is also for the purpose of developing technology for connected boats.

In Yamaha Motor’s marine business, we have set up a system supplier strategy and are expanding the peripheral device business such as boat maneuvering systems. In addition, this alliance will accelerate the provision of IoT service and digital transformation in the marine business. In the long term, we aim to "provide greater reliability and a richer marine life" through such high-value-added services and products.

Posted by The World Marine Power Directory at 15:08 No comments: