Gula Skrinet AB to acquire Caterpillar Propulsion AB Öckerö, Sweden, June 9, 2020
Gula Skrinet AB has reached an agreement with Caterpillar Luxembourg Sarl to acquire Caterpillar Propulsion AB and its subsidiaries.
The sale is expected to close on June 30, 2020. Caterpillar Propulsion AB, formerly Berg Propulsion AB, is a leading manufacturer of mechanically and electrically driven propulsion systems and marine controls for ships. The proposed acquisition includes Caterpillar Propulsion AB and its subsidiaries, including Caterpillar Propulsion Production AB, as well as Caterpillar Propulsion Pte. Ltd, its subsidiary Caterpillar Propulsion International Trading (Shanghai) Co. Ltd and its Dubai branch.
The transaction will include the manufacturing operations in Sweden and Singapore and office locations in Shanghai and Dubai. Stefan Sedersten, previously the COO and shareholder of the former Berg Propulsion AB, has a decade of experience in different roles within Berg along with a deep understanding of the global marine business. Stefan is the chairman of Lean Marine Sweden AB and I-Tech AB (publ.), businesses focused on marine equipment and vessel optimization.
The current team within Caterpillar Propulsion will transfer with the sale ensuring continuity of support for current and future customers. Stefan Sedersten is committed to preserve continuity with Caterpillar customers and dealers and to maintain a close business relationship with Caterpillar Inc., supporting both MaK and Cat marine sales, as well as developing its products and services further with other customers in the marine sector. “My message to customers, suppliers and other external partners is clear – we will honor all existing contracts and agreements and make sure to safeguard a seamless transition,” Mr Sedersten said.
The new owner of the company is dedicated to building on what has been achieved during the years with Caterpillar and to continue to develop the company’s external relationships, products and services in close cooperation with customers and partners. “Our aim is to combine the best of two worlds, the innovative and efficient approach of the big company with the flexibility and nimbleness of the small enterprise. This propulsion business is a household name in the industry, well-known for its dedication to customer satisfaction, reliable products and services, and we have every intention to make sure it continues that way. I look forward to serve the customers together with the skilled and experienced people in the entity where I´ve spent much of my past career”.
Headquartered in Öckerö Islands outside Gothenburg, Sweden, Caterpillar Propulsion AB has designed and manufactured heavy-duty marine thrusters and controllable pitch propellers since the late 1920s. Its proprietary systems are employed in maritime applications throughout the world.
Caterpillar: Confidential Green Upon closing of the sale, the products and services will be branded Berg Propulsion.
About Gula Skrinet AB: For information, please contact Stefan Sedersten: +46 768 690 509, stefan.sedersten@bergpropulsion.com
About Caterpillar Propulsion AB: Caterpillar Propulsion AB is one of the world’s leading designers and producers of Controllable Pitch Propellers for the shipping industry. The company is a global supplier of customized marine propulsion systems comprising transverse and azimuth thrusters, controllable pitch propellers and control systems. Technical expertise coupled with extensive industry knowledge deliver products and services with high and durable performance including 24-hour service. For information, visit www.catpropulsion.com.
Posted by The World Marine Power Directory at 06:55 No comments: 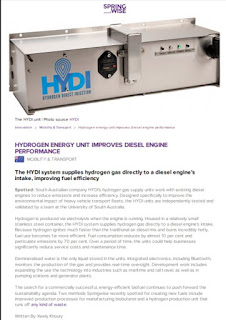 https://www.hydi.com.au/technology/marine-transport/
Posted by The World Marine Power Directory at 15:31 No comments:

Press release: Florø, 26.03.2020
Evoy develops 150 hp electric outboard motor together with Hurtigruten and Frydenbø!
Evoy, based in Florø, Norway has received a lot of attention for their commitment in developing a 100% electric propulsion system for high-speed boats. They are now expanding their portfolio to a turnkey 150 hp outboard system with batteries.
Evoy delivers turnkey plug-and-play 100% electric propulsion systems to new and existing boats. Since the summer of 2019,the prototype Evoy1–a Polar cirkel 860 – has been used for extensive testing and optimization of the system, and has now stepped upto serial production. Last summer Evoy1 was baptized by Norway’s Prime Minister, Erna Solbergand set an unofficial world recordfor production e-boats with 55 knots later the same year. Evoy’s vision is to eliminate emissions from boats. Evoy is based in Florø, Norway, and their systems of up to 800 hp are designed and tested to operate in the toughest environments in the world – the Norwegian coast.
This year Evoy is focused on the commercial market with an inboard propulsion system for boats between 20 and 40 feet. Additionally, they are working on an outboard system supported financially with 1,8Mill NOK from Innovation Norway.
The goal is to have it completedand ready for the market in first quarter of 2021. We have had many inquiries to deliver outboard systems, especially from the PolarCruise segment. Hurtigruten were early to announce their interest and wanted to have 30 systems delivered in the spring of 2020. We like challenges, but this inquiry was a little tight, even for us, says an excited CEO and Founder Leif A. Stavøstrand.
The Prototype Outboard, which is not drivable yet, was to be released at the Boat Show Sjøen for Allein Lillestrøm, Norway March 18-22. Due to the cancellation, the World Premiere will be in Florø later this season.The Prototype is based on a 90 hp and with a more powerful lower leg, it will likly perform equivalent a 150 hp petrol engine, now with electric propulsion. The testing that will be performed during summer and fall of 2020 will give the final results on performance and range.
Hurtigruten’s goal is to operate 100% emission free. We will lead the way towards a more sustainable tourist industry, and nothing will be more natural than to use electric propulsion, also with our smaller boats. The technology has not been ready, but we believe we can solve this together with Evoy and Frydenbø. We look forward to getting started and to experience how this works towards our usage patterns, the artic temperatures and of course our customers, says an enthusiastic Karin Strand, Vice President Expedition at Hurtigruten.
Hurtigruten has a unique heritage and this combined with a very skilled crew and small expedition ships gives them the opportunity to offer exciting and nature-based experiences in the world’s most remote areas. Hurtigruten holds 15 ships which makes them the world’s largest and versatile supplier of activity specific travels in the polar regions of the world.
The Outboard motor is especially designed to fit the Zodiac Milpro MARK 5, and for this boat it will perform at 115 hp.This boat is the industry standard for the Exploration Cruises in Artic regions. The boat is delivered by Frydenbø Milpro.
The Exploration Cruise industry has long been in demand for an electric propulsion solution. We have great expectations in this project and believe it will generate high volumes once the completed system proves to work as intended. 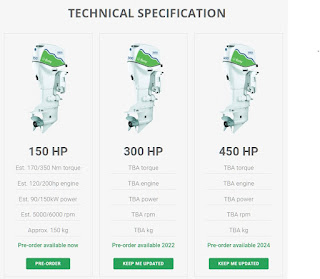 https://www.evoy.no/outboard/
Posted by The World Marine Power Directory at 11:11 No comments: 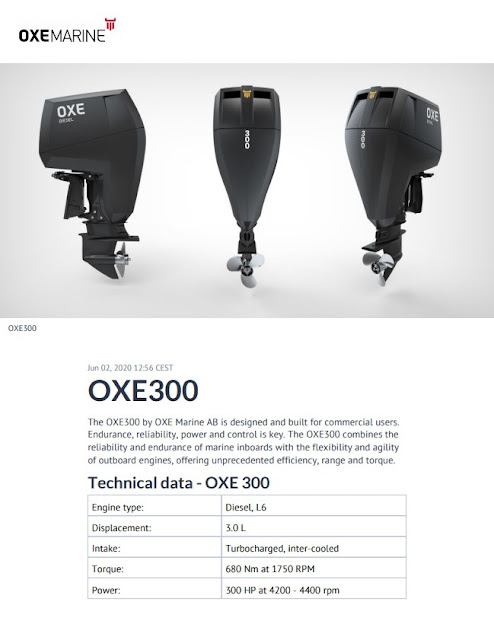 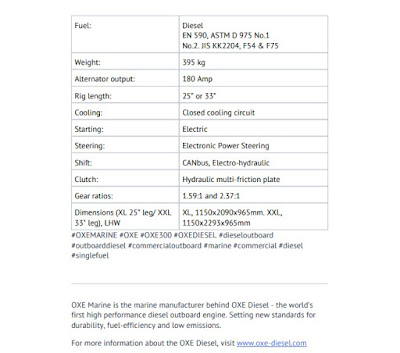 Posted by The World Marine Power Directory at 15:57 No comments:

The World Marine Power Directory
One stop for specifications of marine engines which is regularly updated.