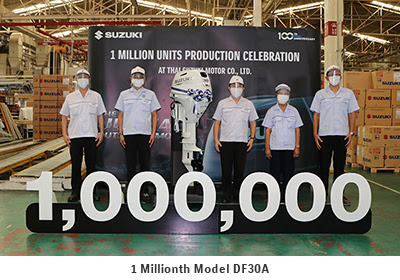 Thai Suzuki, which started production of motorcycles in 1968 as Suzuki’s first motorcycle plant outside of Japan, started production of outboard motors in 1999. The company currently produces a total of 17 small outboard motor models, of which 12 four-stroke models ranging from 2 to 30 horsepower, and 5 two-stroke models ranging from 9.9 to 40 horsepower. Its destinations go beyond Thailand to countries throughout the world including Japan.

Thai Suzuki achieved this milestone in 21 years and 1 month since starting production in 1999. Suzuki will make efficient production of outboard motors by utilizing both plants in Japan and Thailand to meet wide range of needs.

*Based on Suzuki research as of the end of September 2020
Posted by The World Marine Power Directory at 11:05